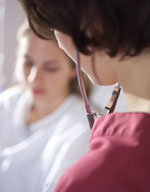 The ankle-brachial index (ABI) is a simple, reliable means for diagnosing PAD. Blood pressure measurements are taken at the arms and ankles using a pencil shaped ultrasound device called a Doppler. A Doppler instrument produces sound waves (not x-rays) and is considered noninvasive because it does not require the use of needles or catheters. The ABI test is simple enough to be performed in any doctor's office or vascular laboratory. Not only is the ABI one of the most reliable tests for PAD, it is also the least expensive

You will be asked to lie on your back while standard blood pressure cuffs are placed around your ankles and arms. These cuffs will be inflated briefly above your normal systolic blood pressure.

Then the ankle systolic pressures are divided by the highest arm pressure to establish an ABI measurement for each leg. The ABI range that is generally considered normal is .95 to 1.2.

The ABI test is used to document the presence or absence of PAD, and can be performed every year to quickly assess whether PAD is getting worse. Obviously, treatment for the disease tries to slow the rate at which leg arteries become blocked.

The ABI can also predict how severe an individual's atherosclerosis is and the risk of future leg problems (such as development of future leg rest pain, poor healing of foot wounds, need for leg bypass surgery, or amputation). It can also predict the risk of future problems from atherosclerosis in other parts of the body (such as heart attack and stroke). Lower ABI values are associated with a higher risk. In fact, the ABI value can be an accurate predictor for patients with coronary heart disease (such as the blood cholesterol value, coronary calcium score, and C-reactive protein value).

An ABI value greater than 0.80 is rarely associated with short-term leg problems such as foot wounds or amputation. Nevertheless, any evidence of PAD (where the ABI measurement is less than 1.00) is associated with future risk of heart attack and/or stroke.

An ABI value between 0.40 – 0.80 is moderately decreased and such patients often experience some symptoms such as pain in the legs. Attention to foot care is extremely important to prevent accidental injury or infection. Again, any evidence of PAD is associated with future risk of heart attack and/or stroke! Serious efforts to keep one's risk factors under control is essential to keep PAD from getting worse.

An ABI value of less than 0.40 indicates severe PAD. Patients should be extremely careful to avoid any foot injuries. Proper foot care may prevent development of non-healing wounds, rest pain, or even gangrene. Usually, care from a vascular specialist is required. The specialist will evaluate the risk and benefits to improve leg blood flow through surgery or other interventions.

The ABI test approaches 95 percent accuracy in detecting PAD. However, a normal ABI value does not absolutely rule out the possibility of PAD for a few individuals. Some patients with a normal or near-normal ABI results may have few symptoms suggesting PAD. A treadmill exercise or reactive hyperemia test may be recommended to test further for the disease and the cause of pain.

Preparing for the Test: 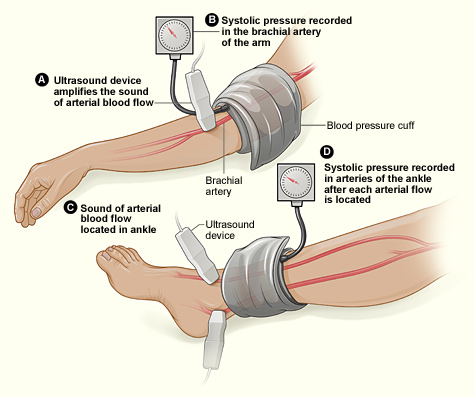